Strategy:
As the mural was to appear in a children’s play-
ground, bright, colourful and simplified imagery was chosen. The subject matter was open, so I decided to use comical farm animals because I grew up on a farm and didn’t need to research already observed features. Next, the illustrations were drawn with ink, scanned in and cleaned up in photoshop. After the approval process, we printed out a transparency for our Paint Dept. to recreate. This snapshot should put the scale of the project into perspective. 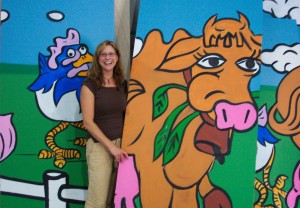